Change For The Better – EOS Spotlight 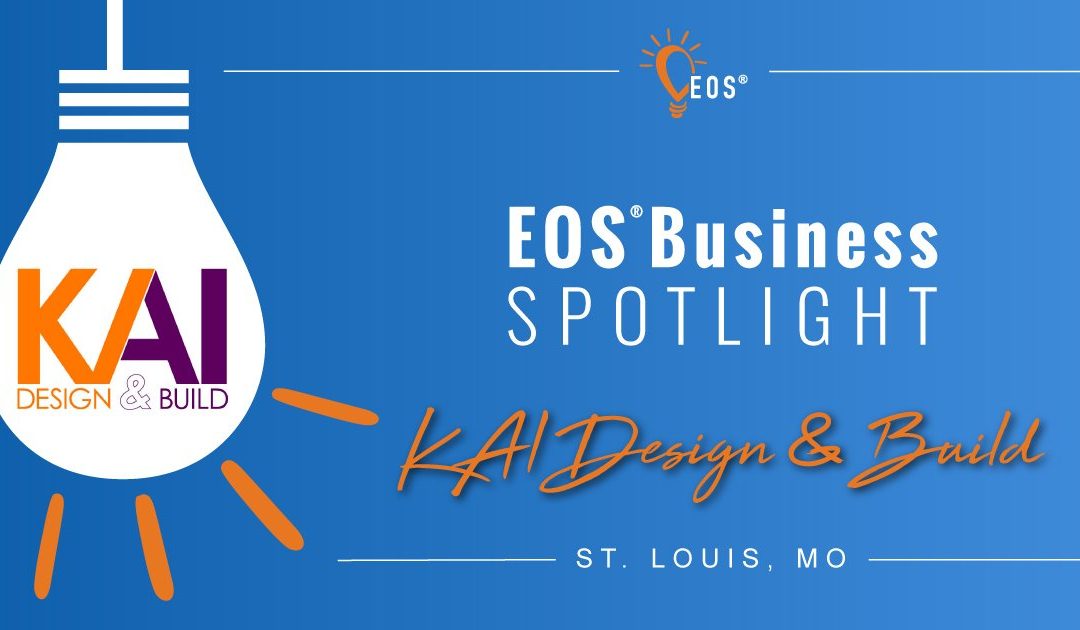 In 1980, Michael Kennedy’s father started KAI Design & Build from nothing in the basement of his house in St. Louis, MO. In 2008, Michael took the reins as president of the company then became the owner and CEO in 2017.

From a humble beginning, KAI and its family of companies have grown to some 400 people as Michael continues to build out the organization, attributing a lot of that successful growth to EOS®.

“I’ve had people from 30,000-plus employee corporations come into our company and say they were shocked at how well-run we were. How they had heard good things about us, but as a smaller company, they didn’t expect us to be this well-organized.”

But to get to that point, KAI had to make some transformative changes. When Michael first heard about EOS three years ago, he felt like his company was anything but well-organized or running smoothly.

“I felt like I was going around a racetrack, a hundred and something miles an hour, trying to build the car while I was going around the track. My crisis management before EOS was a lot of prayer and a little bit like a chicken with his head cut off.”

“Honestly, I felt like I was at a breaking point, where I felt like I wanted to scale the business back so I could manage it. I didn’t understand how I could get to that next level to grow the business and to be freed up to really maximize our potential. At that point, we had more opportunity than I had capacity to manage it.”

Michael heard about the book Traction by Gino Wickman from friends at a Young Presidents’ Organization (YPO) forum. He read it then reached out to Certified EOS Implementer® Jeanet Wade and said, “I want to do this.” That decision has been transformative in his team’s ability to grow the company.

“My crisis management before EOS was a lot of prayer and a little bit like a chicken with his head cut off.”

For the most part, that growth has come by figuring out the things that the company needed to start doing and the things it needed to stop doing. And that involved taking apart and analyzing every part of the business. Another area of change that EOS helped Michael manage was in the leadership team.

“In our case, it was too big,” he says. We used the People Analyzer™ on all the seats and we discovered people who were stronger in operational or technical areas, but who shouldn’t have been on the leadership team.” But even when it’s the right thing to do, change can be painful.

“When it came to the leadership team, I listened to my gut and the rest of the team thanked me for it because a lot of that tension left the air and everyone was more relaxed. It’s amazing how much more everyone opens up when you have the right people in that room. So if your room feels off, it may be because someone in that room needs to go.”

Another tool that had a great impact on Michael and KAI is the Level 10 Meeting™. “The Level 10 Meeting is something we’ve been able to push down to all our different business units and to the different levels of the organization. I can walk into a meeting at any point and I know what’s happening next and what they’ve already done by looking at their meeting agenda and Scorecard. I’ve seen a major change for the better in our company just from implementing Level 10 Meetings.”

“I’ve seen a major change for the better in our company just from implementing Level 10 Meetings.”

Not only has implementing EOS brought a lot of positive change to KAI, but it’s also helped Michael get a better sense of control and freedom.

Putting EOS and the tools in place has allowed him to delegate and elevate to the point where he can spend some time with his family or take a vacation and not have to feel like he needs to call or check in.

“I can manage my business from a dashboard versus having to call everybody and ask what’s going on,” he says. “I feel comfortable stepping away for a day or two or even a week without talking to anyone. But before EOS, I felt like I couldn’t afford to miss anything.”

OPENING DOORS FOR OTHERS

For Michael, KAI is more than just a company or a business. It’s an opportunity to leave a legacy to his community in addition to the one left by his father.

“As an African American architect in the 1970’s, my father defied a lot of odds and he overcame them. He showed that it could be done. My dad worked really hard to open doors and now we’re in rooms we’ve never been in before. So for me, I want to know how I can help by opening doors for others. I want to give back and help others be like us. I want to leave a positive impact on the communities we work in.”

And what does Michael’s father think about all that his son is accomplishing?

“He’s very proud of me, but he’s worried too. He sees all the pressure and the stress because I keep building this business out. And I think as a parent, you want to see your kid be successful, but you want it to be easier too. He keeps asking me why I make it so hard on myself!”

Making transformative changes in your organization requires careful analysis of what to stop doing and what to start doing. While never easy, persevering with EOS can give you the control and freedom you’re looking for.