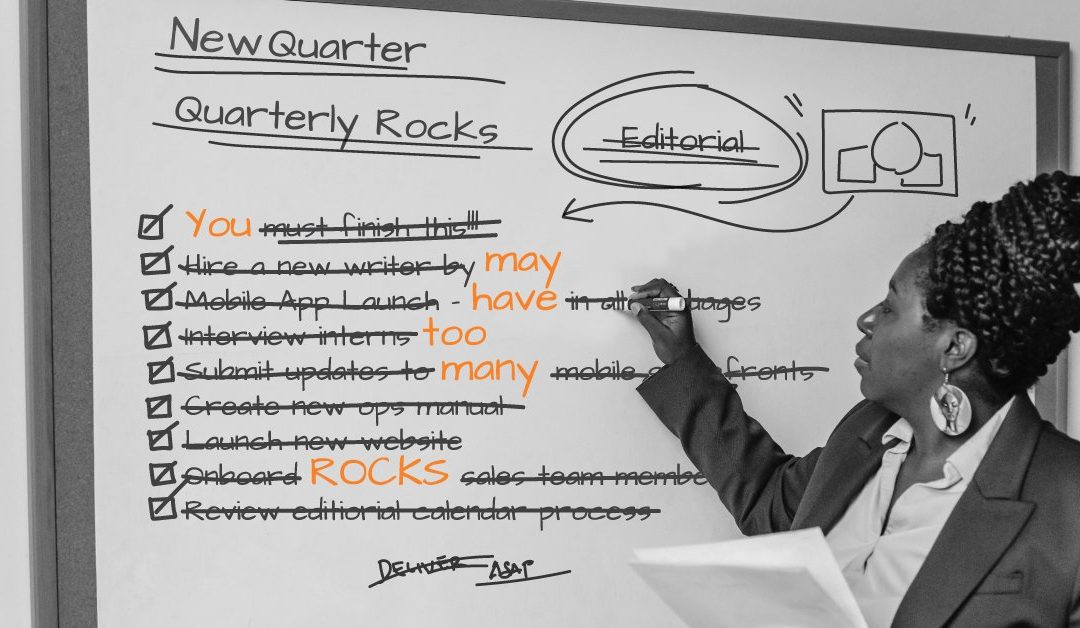 One of the most effective ways to get Traction® to grow your business is by selecting and completing quarterly Rocks that will make a significant difference to your business.

Rocks are the most important objectives that the business commits to achieve over the next 90 days. They are your top priorities for the upcoming quarter. They should either solve the most pressing issues facing your business, or represent substantial progress and move the business forward towards achieving its plans for the year and its long-term vision.

Given the importance of Rocks, it became a source of frustration when some of my clients were not completing many of their Rocks for a variety of reasons.

For instance, I had a leadership team who took on twenty Rocks instead of prioritizing the top three to seven Rocks that they believed they could achieve. I told them they must have rocks in their heads to have that many!

They insisted on keeping all twenty Rocks. So with a bit of sarcasm, I asked, “Which thirteen Rocks will you be happy not to complete by the end of the quarter, because there is no way you will complete twenty Rocks.”

They ignored my concern, with the result that only one of their twenty Rocks was completed, leaving them frustrated and with a lot of unfinished work on their hands.

This frustration led me to speak to several leadership teams. Some that were consistently completing their Rocks, and others that were not. I concluded that while they all started the quarter with the best intentions to complete their Rocks, some lacked a plan and discipline to make their Rocks completion a reality.

To help leadership teams to ‘Rock their Rocks’ and consistently complete what they commit to, I now get them to follow a simple Rock Completion checklist:

Rocks are a serious undertaking and can make a big difference to the business. So, if you want to ‘Rock Your Rocks’, set yourself up for success at the beginning of each quarter and aim to achieve 80% Rock completion.